With its history as the capital of the Duchy Burgundy, Dijon is a beautifully preserved city filled with Renaissance and medieval buildings dating back to the 14th and 15th centuries. Its compact historic centre makes it ideal to stroll through, and the ideal starting point is at the Place de la Liberation, a breathtakingly beautiful square.

As well as numerous cafes perfect for an early morning pick me up, the square is surrounded by other incredible buildings, mostly belonging to the architectural complex of the Palais des Ducs et des Etats de Bourgogne, the Palace of the Dukes. Built over successive periods, here you’ll find the 14th century Ducal Palace, the current town hall and city tourist office, and the Musee des Beaux-Arts which houses major collections of art ranging the 14th to 19th century. The architectural richness of Dijon continues a short walk away on the picturesque Rue des Forges, a real photographer’s delight, with its 15th century buildings topped by multi-coloured roof tiles home to fine-dining restaurants and shops. 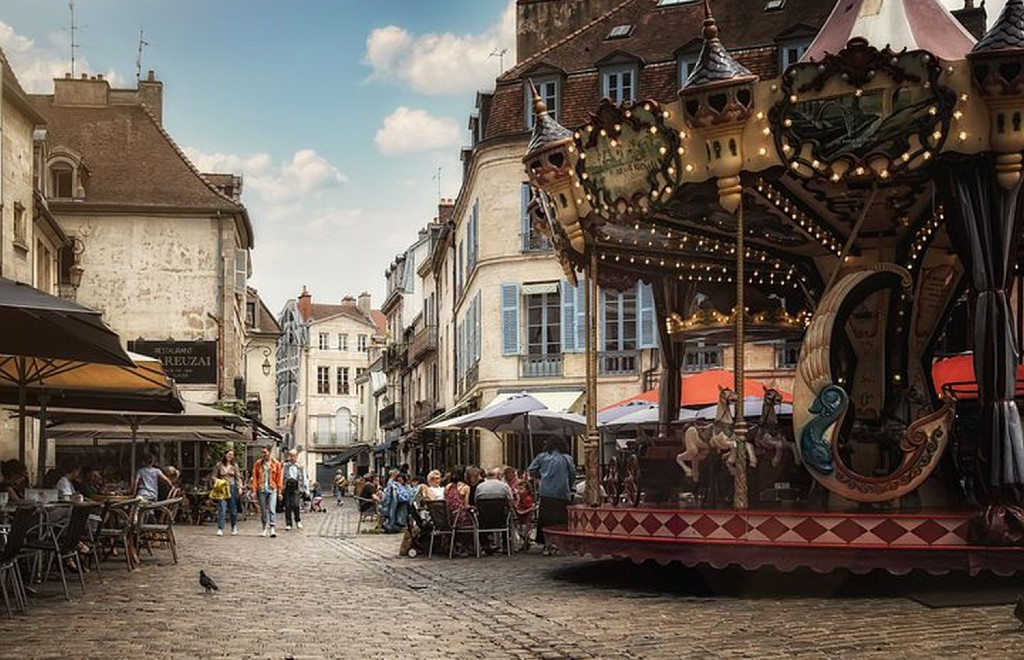 A short walk away will bring you to the Cathedrale Saint Benigne de Dijon with its beautiful mosaic roof, and a crypt containing sculptures dating back to the 11th century and after crossing the railway into the city centre you’ll find the Natural History Museum based in the Jardin de l’Arquebase, a beautiful botanical garden and arboretum. Included in your tour is an excursion to Beaune, the capital of the Burgundy wine trade, 20 minutes away by train from Dijon. Home to many major wine merchants, the old centre is also renowned for the Hotel Dieu, a medieval hospice used as a hospital until recent times, but famous for its stunning roof of multicoloured glazed tiles. Don’t forget to bring back a pot of Dijon’s other most famous export, its mustard! 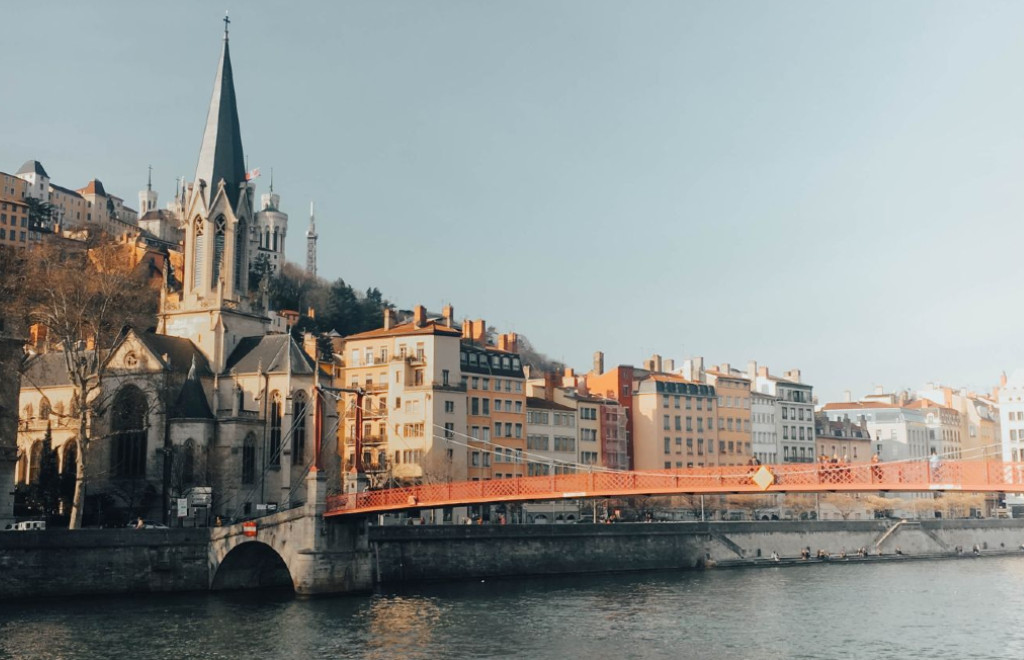 Check out of your hotel and board an early morning train to Lyon Part Dieu station. On arrival in Lyon, transfer to your hotel for the 1st night of your stay, with the rest of your day at leisure.

Lyon is France’s second largest city after Paris, and sits at the junction of the Saone and Rhone rivers.  Start your exploration of Lyon from the large pedestrian square at Place Bellecour and cross the Saone river at the Pont Bonaparte Bridge to reach one of Europe’s most extensive Renaissance neighbourhoods, the old town or Vieux Lyon, which is divided into 3 sections, St Jean, St Paul and St Georges. In the St Jean area you’ll find the 14th century medieval Cathedral de St Jean Baptiste with its striking astronomical clock, and across the square you can rise to the top of the hill on the Funicular railway up to the 19th century La Basilique Notre Dames de Fourviere with its 4 octagonal towers and religious art museum.

In the St Jean area you’ll find the 14th century medieval Cathedral de St Jean Baptiste with its striking astronomical clock, and across the square you can rise to the top of the hill on the Funicular railway up to the 19th century La Basilique Notre Dames de Fourviere with its 4 octagonal towers and religious art museum.

There are stunning views from here over the old town and toward the St Georges area where the two rivers combine, and this is the site of the new scientific and anthropological Museum des Confluences. A short walk away along the hilltop are the beautifully preserved Roman remains of the Theatre Gallo Romain de Lyon built as an amphitheatre in 15 BC. Returning from the basilica, you can slowly stroll back down the hill, through the maze of narrow Renaissance streets and buildings to the St Pauls area.

Lyon has a great place in cinema history being the birth place of the Lumiere brothers, with a film museum devoted to their history a short way out of the centre and the central Musee Cinema et Minature, concentrating on modern cinema and containing movie props and special effects exhibits. Don’t forget that Lyon is also regarded as the “Gastronomic Capital of the World” with at least 15 Michelin-starred restaurants in the centre, but all of its restaurants offer a fine selection of regional and specialty dishes from the area, influenced by its surroundings and history as being at the crossroads of Europe for herbs and spices, and of course, centre of the Rhone region’s wine trade.

Check out of your hotel and board an early morning train to Avignon Centre station. On arrival in Avignon, transfer to your hotel for the 1st night of your stay, with the rest of your day at leisure.

Avignon sits on the Rhone river in the region of Provence and is a lively place full of culture and history, becoming a World Heritage Site in 1995. Across from Avignon Centre station you can immediately see the rampart walls built in the 13th century that surround the city, so the best place to start your walk through Avignon is to go through the gap in the walls at Porte de la Republique through to one of the main streets in Avignon, the Cour Jean Jeures. Go off this main street and you’ll find the historic green walled food market of Les Halles d’Avignon, packed full of local produce, meat, cheeses and local Cotes du Rhone wine. 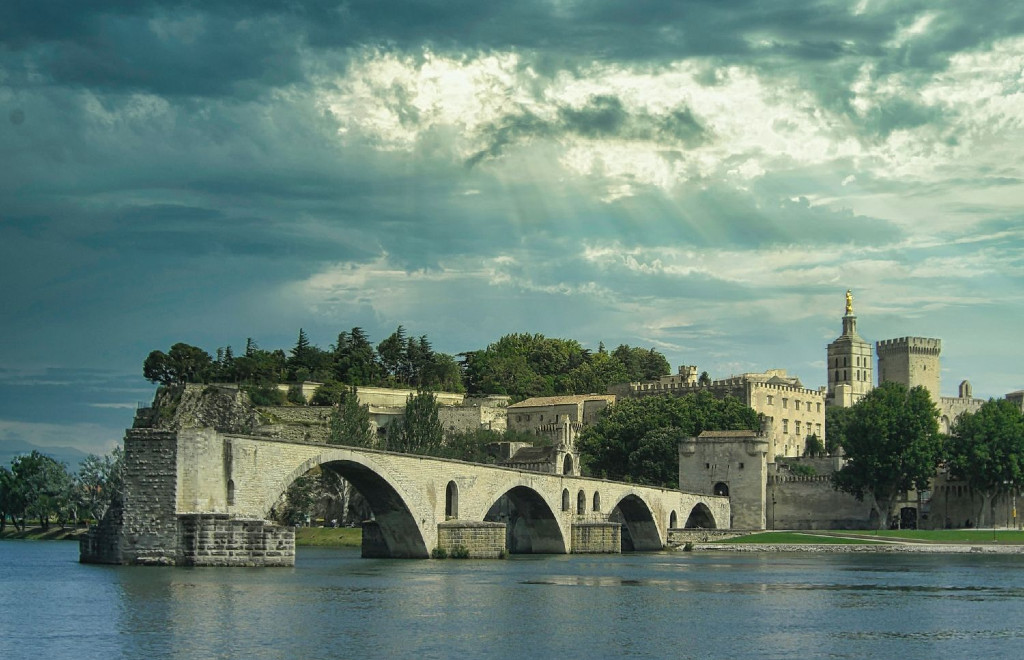 A short walk away brings you to the Gothic Basilique Saint-Pierre dating from the 1300s and on to the lively town square of the Place de l’Horloge with its many bars and restaurants, great to people watch from. Prior to the French Revolution, the city was controlled by a succession of Popes of the 14th century, and a short walk away their historical influence is no clearer than the fortified Palace des Papes, one of the most important medieval Gothic buildings in Europe, and enroute to the river take a quiet stroll through the beautiful Jardins des Doms, a hilltop park with stunning views. Come out of the park and you’re at the river, and where better place than at the famous Port Benezet. Crossing only part way across the Rhone, many of its spans permanently washed away by floodwaters in the 1600s, the bridge is the origin of the old nursery rhyme known worldwide; “Sur le pont d’Avignon, l’on y danse, l’on y danse” translated as ”On Avignon Bridge, all are dancing”. Get your dancing shoes on if you’re in the mood!

Included in your tour is an excursion to the village of Sorgues, right in the heart of the region that produces the world-renowned Chateauneuf-du Pape, “The Pope’s New Crib”, 10 minutes away by train from Avignon Centre station. 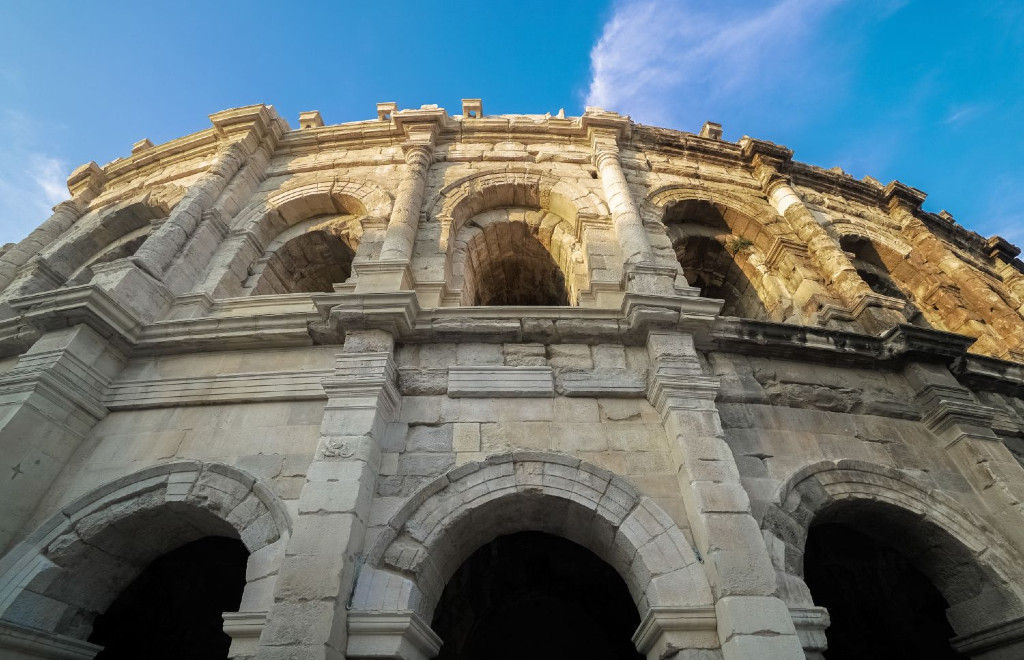 Check out of your hotel and board an early morning train to Nimes station. On arrival in Nimes, transfer to your hotel for an overnight stay, with the rest of your day at leisure.

The charming city of Nimes was an important outpost of the Roman Empire, and has rare and beautifully preserved examples of its stunning architecture, with the tri-level aqueduct of Pont du Gard built in the 1st century to the north east of the town to cross the Gardon river.

Making your way along a tree lined avenue from the train station will bring you to the Esplanade Charles de Gaulle, with its Fontaine Pradier at its centre, and directly to the left you come to one of Nimes’ centrepieces, the original Roman amphitheatre, which is still used to this day for open air concerts. If there’s an event going on but you can’t afford a ticket, it’s perfect to just sit outside on the steps and take in the atmosphere, especially in summer with swallows circling through its arches.

Stroll through the centre with its many small shops and courtyards and you’ll find the  traditional and diverse indoor market of Les Halles, full of stalls offering local delicacies such as fruit, cheese, bread, meats and seafood. A short walk away is another well preserved Roman landmark, the Vitruvian temple of the Maison Carree, and as a complete contrast directly opposite, the Carre d’Art designed by Sir Norman Foster, and home to over 400 pieces of modern art. Away from all of the culture Nimes has to offer,  take your time to walk through the beautiful 17th century Jardins de la Fontaine, with its botanic gardens, ponds and lesser Roman ruins such as the Temple of Diane, and wind your way uphill to the Tour Magne or Roman Tower with its gorgeous views across the town and countryside.

Check out of your hotel and board an early morning train to Bordeaux St Jean station. On arrival in Bordeaux, transfer to your hotel for the 1st night of your stay, with the rest of your day at leisure.

The great port city of Bordeaux, the capital of New Aquitane, is situated in the south west of France and has a reputation preceding it with its vineyards producing some of the world’s finest wines. A good start for your walk is to make for the Eglise Saint Croix, built in the 11th & 12th centuries on the site of an earlier Benedictine abbey, and then make your way toward the long pedestrian area on the edge of the River Garonne waterfront, which gives access to so many of Bordeaux’s sights. The free standing bell tower of the Gothic Basilique Saint Michel will come into view next, and if you’re not afraid of heights, you can climb to its 114 metre spire for great views across the city. 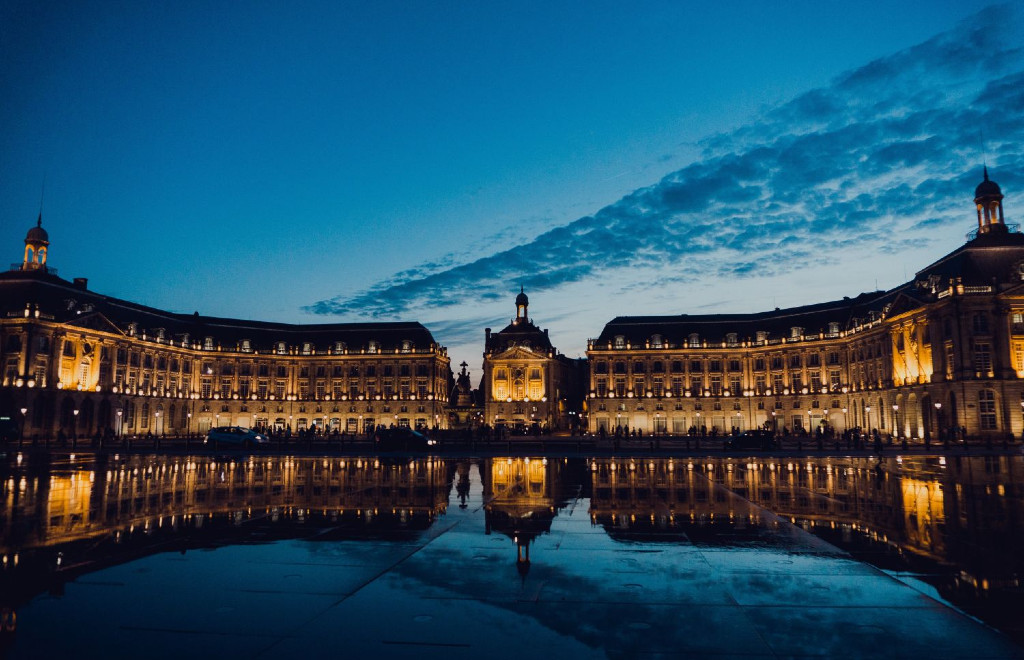 Overshadowed by the spire is the the city’s oldest road bridge, the 19th century Pont de Pierre or “Stone Bridge” a little further along, and with its 17 arches crossing the river. For a much lower view across the river you can visit the Porte Cailhau nearby, a monument built in honour of Charles VIII of France. At the end of your walk along the river you’ll come to arguably one of Bordeaux’s most stunning sites, the Place de la Bourse. This crescent of 18th Century buildings facing the waterfront is comprised of the Palais de la Bourse (the old stock exchange) next to the Musee National des Douanes (the Customs Museum), at its centre, the Fountain of the Three Graces, and in front a modern addition, the black granite Miroir d’Eau, the world’s largest reflecting pool, which produces stunning reflections of the classic buildings behind through its thin water layer.

Before heading back down through the city centre, take time to sit for a while in the Esplanade des Quincones, the largest town square in Europe, with its elaborate bronze fountain and column dedicated to the Girondins of the French Revolution.  Very close by you’ll come to the Grand Théâtre of Bordeaux built in 1870 on the ancient site of the Roman forum. This is the centerpiece of the Place de la Comédie, a hub of city life, and is still used for opera events today. Running south from the Grand Theatre is the 1.4 km Rue Sainte-Catherine, the oldest existing thoroughfare in Bordeaux. Down the length of this bustling pedestrianized street you’ll find an eclectic mix of shops and cafés passing through some of Bordeaux’s most vibrant and artistic areas, with other attractions such the regional Musee Acquitane and the 18th century Grosse Cloche, the “Big Bell” hung between two towers of a former jail, being short stops away. For your journey’s end there’s no better place than the Place de la Victoire, a great place to eat, drink wine and people watch and drink wine at any of the many bars.

An optional extra while you’re in Bordeaux is an excursion by train to the town of Margaux 45 minutes away, with a tour and wine tasting at the Chateau Marquis De Termes, home to a varied selection of wines drawn from Merlot, Petit Verdot and Cabernet Sauvignon grapes.